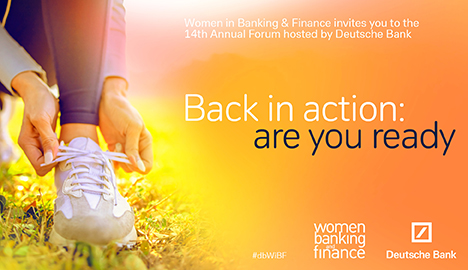 Women in Banking & Finance invites you to our 14th Annual Forum hosted by Deutsche Bank.

The past few years have profoundly changed many aspects of our lives and there seems no better time to consider new possibilities. Our panel will discuss how they are approaching the ‘new normal’ with a fresh perspective.

We encourage all attendees to prepare for our Annual Forum by contemplating how the past few years have profoundly changed many aspects of our lives.

Knowledge transfer from accomplished leaders who will share their personal and professional insights.

Guests will hear first-hand insights on getting back in action, to consider new possibilities and silver linings.

Lauren Jackson is recognised as one of the finest women basketballers of all time. She has overcome many challenges, both professional and personal, with determination and strength.

A four-time Olympian, and WNBA and WNBL champion, she is the first Australian player of either gender to play on an international level.

Lauren is known for her inherent leadership capabilities including the captaincy of the National women’s basketball team to multiple wins and her ambassadorial roles with a focus on empowering women in sport, and as a Champion for Gender Equality for the Australian National Committee for United Nations Women.

At just 17, she led the Australian Institute of Sports team to the Women’s National Basketball League (WNBL) championship. Her Women’s National Basketball Association (WNBA) career was an incredible success story, beginning with a number 1 draft selection by the Seattle Storm in 2001. Winning two WNBA titles with the Storm she earnt the WNBA Finals Most Valuable Player Award in 2011, and was named in the Naismith Memorial Hall of Fame in 2021.
Following her time in the WNBL, Lauren commenced a role with Basketball Australia where she is now the Head of Women in Basketball. Lauren represented Australia with the Opals at four Olympics, winning three silver medals. Incredibly, after retiring from international basketball due to significant injuries nearly 10 years ago, she returns to the Opals squad this September for the FIBA Women’s World Cup in Sydney.

She balances motherhood to two beautiful boys and her rising career as she continues to strive for greatness, on and off the court.

Gabrielle Trainor is a non-executive director and advisor whose experience covers more than twenty-five years on boards in the public and private sectors. Her background is as a lawyer, newspaper journalist and public sector executive and she had a long career as a consultant in issues management, stakeholder engagement and public policy. She has conducted and been part of several expert reviews on governance and organisational culture issues for government agencies.

Gabrielle’s current appointments include as an AFL Commissioner. She is a director of listed investment company WAM Global, the Western Parkland City Authority, the Major Transport Infrastructure Authority (Vic), construction company Built, and the City Renewal Authority (ACT). She sits on the Executive Committee of the Committee for Sydney. Gabrielle has a long involvement with Western Sydney University and sits on the WSU foundation and chairs Western Creative, the university’s arts and culture strategy. She is an adviser to law firm Gadens.

Gabrielle chairs the Construction Industry Culture Task Force, a collaboration of industry and government. She is a trustee of the Charlie Perkins Trust, which sends high performing Aboriginal and Torres Strait Islander graduates to international universities such as Cambridge, Oxford, and Harvard. Gabrielle was appointed an Officer of the Order of Australia in 2017. The GWS Giants AFLW team best and fairest medal has been named in her honour.

Adam Spencer is a famous Australian media personality and public mathematician. He likes to describe himself as “nowhere near Australia’s best mathematician - but possibly it’s best known”. Adam was completing a PhD in Pure Mathematics at the University of Sydney when he won a national Raw Comedy championship with Triple J, Australia’s youth radio station. He went on to become one of Australia’s most respected, wittiest and thought-provoking breakfast radio commentators across Triple J and later ABC 702. His dexterity at being both mathematical, he has authored 7 best-selling books for talented maths students, and verbal, voted best debater in the world at the 1996 World Championships, makes him a curious customer indeed.

Adam is currently the Ambassador for Science and Mathematics at the University of Sydney, and his latest book, Maths 101, for Dumb Dads and Desperate Mums, has been released by Hardie Grant.