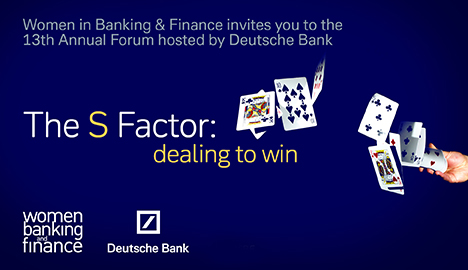 Women in Banking & Finance invites you to our 13th Annual Forum hosted by Deutsche Bank.

As we meet the extraordinary environmental, social and political challenges of our times we ask how can we deal a better hand for our society?

During this virtual event our panel will share their insights on how social initiatives will help accelerate us to a sustainable future.

THIS EVENT IS FREE FOR WiBF MEMBERS - use code BRANDYOU at checkout to redeem your free registration.

Knowledge transfer from accomplished leaders who will share their personal and professional insights.

Guests will hear first-hand insights on how social initiatives will help accelerate us to a sustainable future.

Vanessa Hudson has been Qantas Group Chief Financial Officer since 2019. She oversees financial planning and analysis, treasury, procurement and investor relations.
With the onset of COVID, Vanessa has had a pivotal role in navigating the enormous impact of what has been an unprecedented crisis for global aviation on the national carrier’s balance sheet. This has included an equity raising, tapping debt markets and an increasing focus on recovery as domestic travel normalises.
Since joining the airline in 1994 she has held a number of roles across network planning, sales, and product and service.
Vanessa holds a Bachelor of Business and has been a Chartered Accountant for almost 30 years.

2021 marks Nashen Moodley’s tenth year as Director of Sydney Film Festival. Recognising an important social power in film, Nashen’s passion for wide-ranging and inclusive cinema and film festival culture is a vision he has brought to his role and is evident in all nine programs he has delivered.
During Nashen’s tenure, the SFF program has expanded to include over 300 films from 55 countries, and he has been a driving force in many important initiatives to support Australian filmmakers and the film industry, including the new Deutsche Bank Fellowship for First Nations Film Creatives, launched in partnership with Deutsche Bank in May this year.  In 2020 and 21, with CEO Leigh Small, Nashen has led SFF’s rapid pivots to include virtual programs and smaller in-cinema opportunities outside of lockdowns, with an overriding focus on providing opportunities for filmmakers in two years of major disruption.
Born in South Africa, Nashen studied English and philosophy at the University of Natal working as a journalist before turning to film. As Manager and Head of Programming at the Durban International Film Festival (2001–2011) he dramatically increased its content and reach, and also raised the profile of the African film industry, establishing the Durban FilmMart to give African filmmakers the opportunity to pitch projects to leading financiers. Nashen is highly respected on the international film festival circuit and holds numerous advisory and consultancy roles in major film festivals across Asia, Europe and the Americas.
Sydney Film Festival will return to cinemas in November with a 68th Edition that will truly reflect the times.

Fiona Trigona is the Executive General Manager and Group Treasurer, NBN Co.
Fiona has been NBN Co Group Treasurer since March 2021 and is responsible for driving the strategic direction of funding activities, growing NBN Co’s investor base and running a broad range of funding programs. In her previous role, Fiona was Head of Funding and Balance Sheet for NSW Treasury Corporation (TCorp), where she was responsible for the management and funding of the $100bn Balance Sheet.
Career highlights include managing Australia’s largest-ever sustainability and green bond issuances to date in the Australian market, each valued at A$1.8bn.
Fiona holds a Bachelor of Science from the University of Sydney, majoring in Pure Mathematics and Chemistry, and a Graduate Diploma in Applied Finance and Investment from the Securities Institute of Australia (FINSIA). In addition to her accreditation with the Australian Financial Markets Association (AFMA), she was a member of the AFMA Market Governance Committee and AFMA Professionalism Committee and a former chair of the NSW Sustainability Bond Committee.
Fiona’s passion for the profession also extends to championing diversity and development and as well as being a regular panellist and speaker at events like the Women in Banking and Finance Annual Forum, she is an experienced mentor and has participated in a number of internal and industry programs including at TCorp and now in her role at NBN Co.

Moderating the forum will be Adam Spencer, commentator, polymath, podcast host and author.
Adam Spencer was completing a PhD in Pure Mathematics when he happened to win the national Triple J Raw Comedy championship in 1996. From there, a television and radio career beckoned and Adam completed 15 years as one of Australia’s most respected, wittiest and thought provoking breakfast radio commentators across Triple J and later ABC 702.
Also a celebrated author, Adam’s latest books include THE LITTLE BOOK OF NUMBERS, THE BIG BOOK OF NUMBERS, WORLD OF NUMBERS, TIME MACHINE, THE NUMBER GAMES, THE TOP 100 and NUMBERLAND available from www.adamspencer.com.au